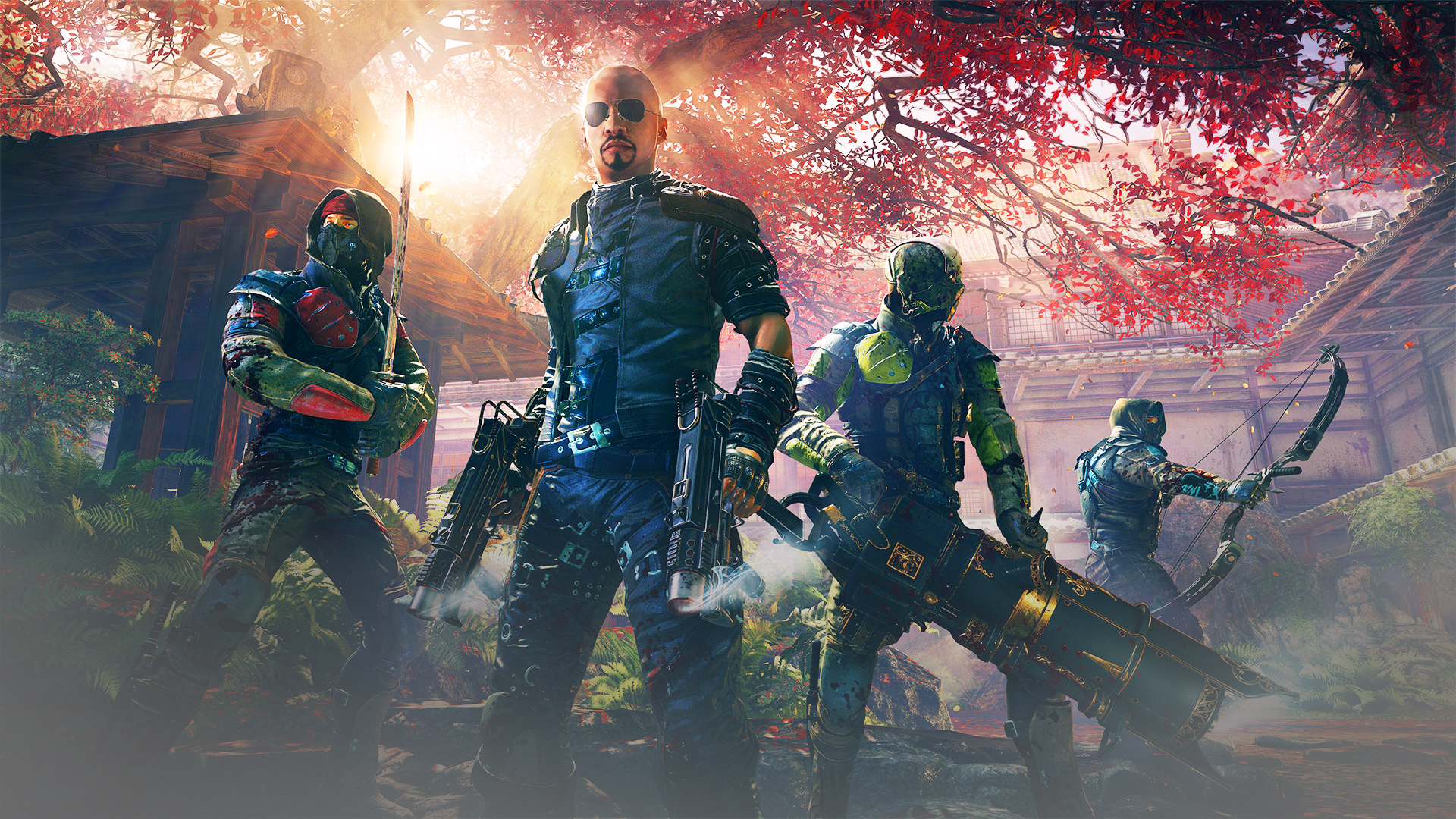 Following the exploits of Lo Wang five years after the events of his reboot, Flying Wild Hog’s ludicrous but enjoyable ninja extravaganza returns for a second round of relentless slaying and punning. This time, it also includes a new four-player online co-op mode, important tweaks to the established formula, and a typically fast-paced weapons-first approach.

Despite its title, shadows are only peripherally used here. Sure enough, Wang is able to use them – having the nifty ability to see in the dark certainly helps – but which he rarely does. He’s a ninja solely by title and in reality he’s about as gung-ho as they come. This isn’t such a bad thing; it’s full of silly moments, some which cause the occasional guffaw, but which sometimes make you question the sanity of the script writer. This deranged silliness is what makes it stand out, though, and more often than not comes across as asinine fun in the craziest of ways. Take Wang’s characteristic sharp-tongue, for example, as he brazenly blurts out witticisms while he pummels hundreds of enemies with bullets in a split moment. It’s this sense of character that it holds in abundance, although it shamelessly undermines its own comicality at times. The shock value it provides is only there for so long, and the effect wears off once you’ve heard “here goes the boom-stick” twice in quick succession. Even the sharpest of tongues can be blunted with enough repetition, and it remains to be seen just how varied the joke book is. Likewise, general dialogue is typically elementary with focus instead placed on gameplay.

Thankfully it provides plenty of variation in this regard. Weapons take centre stage as you quickly switch between a medley of different types: shotguns, pistols, and automatics – some of which can be dual-wielded – fill out the basic categories, while otherworldly weapons like an electrocuted grenade launcher and a green machine gun that looks like something straight out of a 70s sci-fi movie provide some variation. Swords can also be used, including some Wolverine-like fist blades that allow you to dance like a ballerina while painting a canvas of blood, almost like you’re finishing in the arabesque position.

It’s about how you utilise each weapon, rather than sticking to one or two. Weapons level up separately which forces alteration, but different weapons provide plenty of encouragement for mixing-it-up anyway with each one proving useful in different situations. And let’s not forget that Wang is bringing some friends along for the ride. Each of these procedurally generated levels can also be played with three other friends in the new online co-operative mode which is bound to keep the anarchy reigning if you so desire.

Movement is swift and agile; it’s like playing through one of Ang Lee’s martial arts movies. Jumping across rooftops is enhanced by the ability to boost yourself mid-air allowing you to get to those hard-to-reach areas, all while carrying a plethora of destructive apparatus. He really is surprisingly nimble for someone carrying so many tools of destruction. It seems choreographed, but you’re well and truly in control. 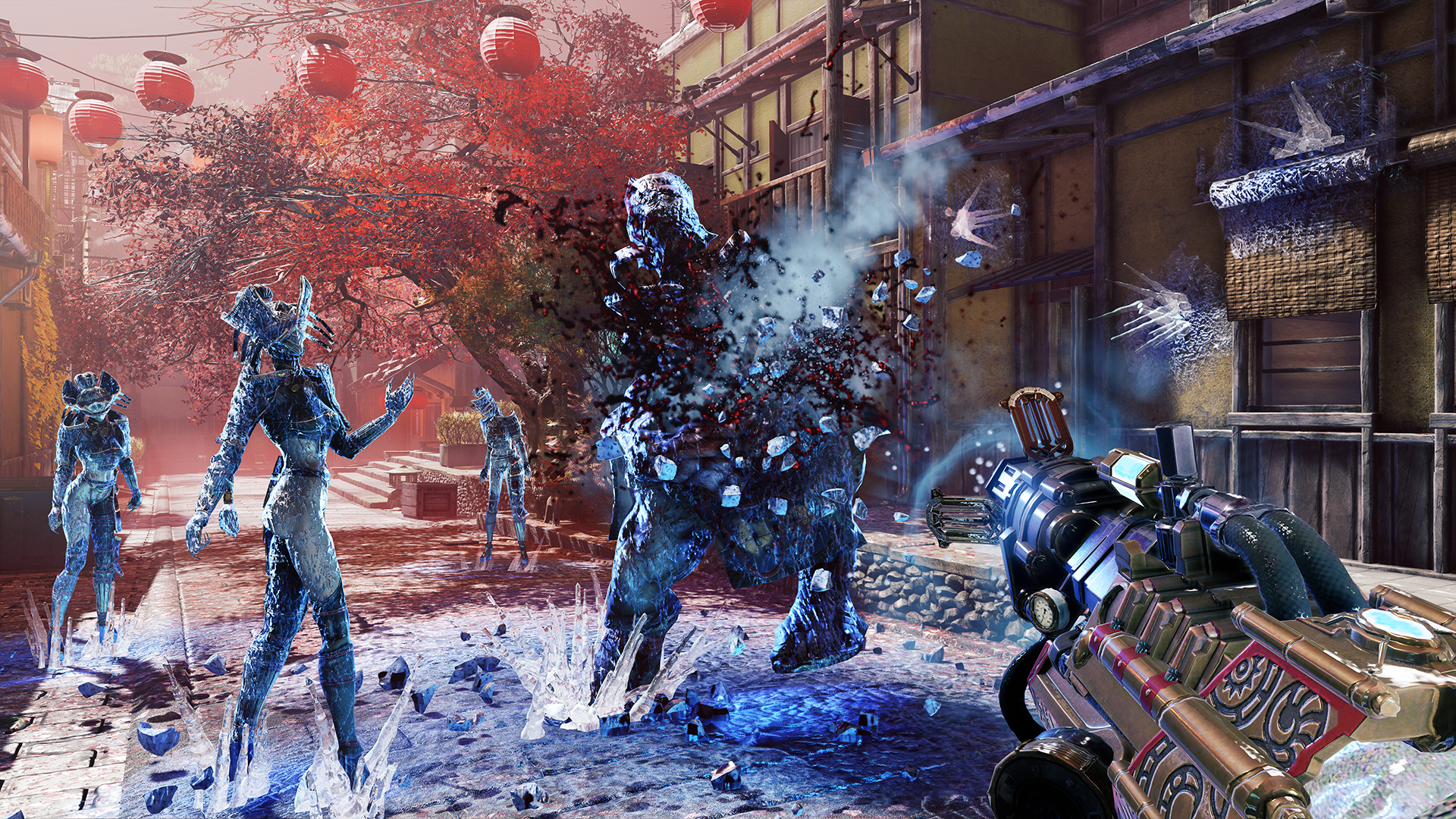 The knock-on effect of co-operative play is that areas are now far less linear than in the past with open areas allowing swathes of enemies to descend on you in a split-second, demanding quick changes of tact, and a level head. In keeping true to its roots in some respects, however, it also maintains some old-school features such as pick-up first-aid packs and health bars. Meanwhile, light RPG-esque elements – including level-ups and buffs – are present, as well as damage numbers which shoot out of enemies like an unexpected sneeze.

Okay, so it’s unlikely to be at the top of everyone’s awards list this year, but Shadow Warrior 2 has spades of character and a crazy enough premise that makes it stand out in the shooter market. It’s not a bad looking game either as willows billow in the wind and lightning turns the sky into a disco for your dance of death. It’s silly, crude and brash, but it looks like a fun distraction from the status quo, and that’s not such a bad thing.